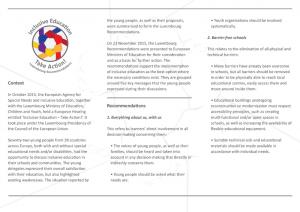 Call for Action at the Luxembourg Hearing

On 16 October 2015 the Luxembourg Presidency of the European Union hosted the Agency’s fourth Hearing entitled ‘Inclusive education: Take action!’. Seventy-two young people with and without disabilities had the opportunity to discuss how their schools and communities ensure an inclusive education for them and what potential obstacles they are still facing in their education and their day-to-day lives. Their call for action will be collected in the form of recommendations for policy makers and they will be presented to the Council of Ministers during the 'Education, Youth, Culture and Sport' meeting on 23 November 2015.

The event gathered 250 participants and stakeholders from all the Agency member countries, as well as policy makers and representatives from European and international institutions. The Luxembourg Minister for Education, Children and Youth, Claude Meisch addressed the young people, stating that ‘we need your contributions. Let’s take action!’. He encouraged participants to take the opportunity to express themselves freely, and assured them that their recommendations would be forwarded to the highest level.

Martine Reicherts, Director of the European Commission’s Directorate-General for Education and Culture, emphasised that within the Commission’s strategic framework Education and Training 2020, inclusion of all students into mainstream education is a stated priority, and that young people ‘deserve concrete actions’.

Gil Steinbach, the Agency’s representative board member in Luxembourg referred to the Convention on the Rights of Persons with Disabilities (2006) signed by 160 countries, which calls for signatory states to ensure an inclusive education system at all levels.

In preparation for the event, the secondary education students representing 28 Agency member countries had the opportunity to discuss key issues with their peers and teachers in their schools. The questions for discussion referred to ways in which their schools support them in their education, examples of how teachers and classmates take into account their needs, accessibility, class organisation and suggestions for ways to overcome remaining barriers to inclusion.  At the event in Luxembourg, young delegates shared their own personal experiences and transmitted their peers’ messages as well.

A number of dignitaries such as László Gábor Lovászy, member of the United Nations Committee on the Rights of Persons with Disabilities, Catherine Naughton, Director of the European Disability Forum, Marianne Vouel, Director of the Service for Special Education at the Luxembourg Ministry of Education, Children and Youth and Jan Filip Libicki, Member of the Polish Senate were present to listen to and provide feedback on the young people’s presentations.

Agency Chair Per Gunvall concluded by saying that the main outcomes of this event will have a positive impact on the debate in Europe on how to implement inclusive education into practice. The young people’s discussions and recommendations constitute a body of knowledge from the perspective of learners with disabilities and they will be taken into account in the Agency’s future work.

The aim of the event was to empower and ensure the involvement of learners in shaping educational policies. The young people’s recommendations and detailed results will be published soon.

For further information on this event, visit the website of the Luxembourg Presidency and see the Luxembourg Government's press release in French on the event.