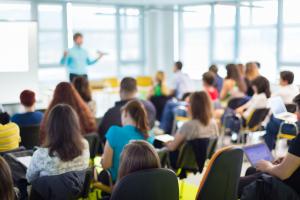 activity: Raising the Achievement of all Learners in Inclusive Education

The development of a growth mindset and moving away from a one-size-fits-all mentality were recurring themes at the Raising Achievement for All Learners in Inclusive Education International Conference. The event took place in Malta on 5–7 2017 April as an official event of Malta’s Presidency of the Council of the European Union (EU). It ran in parallel with the Agency's bi-annual meeting of ministerial representatives from 30 member countries, who joined the plenary sessions.

Among the approximately 100 project participants were stakeholders from the project’s three Learning Communities: Istituto Comprensivo Antonio Rosmini and Istituto Tecnico Agrario Emilio Sereni (Italy), Group of Schools in Łajski (Poland) and Calderglen High School (United Kingdom – Scotland). School leaders, researchers, teachers, parents and policy-makers from Agency member countries participated in workshop sessions, focusing on pedagogy, leadership and collaboration. Ten learners from the Learning Communities and Malta were involved in an interactive workshop where they shared their perspectives on achievement.

In his opening address, Mr Joseph Caruana, Permanent Secretary of Malta’s Ministry for Education and Employment, mentioned the Agency’s contribution to the Council Conclusions on Inclusion in Diversity to Achieve a High Quality Education For All.

Mr Caruana encouraged delegates to move away from uniform notions of achievement, saying, ‘We all have different talents and abilities and all of these need to be recognised’. Mr Cor Meijer, Agency Director, reinforced this idea in his speech. Ms Dolores Gauci, of Malta’s Ministry for Education and Employment, mentioned the need for a whole-school approach to ensure high quality education for all.

Dr Annalisa Morganti, from the University of Perugia, Italy, reflected on the key messages from the conference and emphasised the power of EU co-operation to raise achievement.

The importance of learner voice in education was emphasised. Indeed, the learners’ workshop outcomes proved to be one of the highlights. The young people presented their frank, engaging views on achievement, using text, video, art, dialogue and interaction with the other delegates.

Mr Evarist Bartolo, Malta’s Minister for Education and Employment, stressed the need to challenge the current model of achievement and to attend to the social and human dimensions of education.

In her closing remarks, Ms Verity Donnelly, the Raising Achievement Project Manager, presented the project’s emerging policy implications. She highlighted the importance of a growth mindset to raise achievement and of all stakeholders continuing the learning journey together, stating: ‘There’s a lot we can do, but there’s a lot we can’t do … yet’.

This was a working conference and the outcomes of the discussions will inform the final project outputs, which are planned for later this year. For more information, visit the project web area.