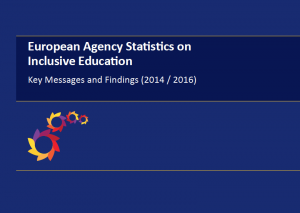 This report presents the analysis of the 2016 dataset collected via the European Agency Statistics on Inclusive Education (EASIE) activities and uses the country data available on the EASIE Data web area. The previous report, 2014 Dataset Cross-Country Report, is also available online.

This report focuses on the 2016 dataset. The data from participating countries is from the 2014/2015 school year and the dataset was processed from 2016 onwards.

The report presents data relating to 17 indicators that were identified and agreed upon with the national data experts. The indicators are based on three areas of country data:

The report is structured around these three areas, with descriptive texts and figures presenting all available country data for each indicator. The information available from the indicators provides insights into the following issues relating to inclusive education:

Downloads Hide 1 file
Please select a file below to open it in a new window, or right click and 'Save link as' to download the file to your local computer.
data collection